The statistics are damning. Type 2 Diabetes is the epidemic of the 21st century. The number of adults AND children with type 2 diabetes (T2D) or pre-diabetes is staggering, but what’s more frightening is the growth.

In the USA now, more than 1 in 3 adults have T2D or pre-diabetes. And this is based on the 2015 figures, that will be updated next year, and we already know the numbers will be soaring well above that.

More than 1.5 million Americans are diagnosed with diabetes every year.

Remember: When you have pre-diabetes (insulin resistance) or type 2 diabetes, you are at a significantly increased risk of all-cause mortality (especially heart disease, stroke, nerve and kidney diseases, and more).

And ALSO remember: only 11% of people with pre-diabetes in the USA actually were aware they had it!

It is killing millions of people globally every year, and the CDC has called that it is now time to find a cure…

THERE ALREADY IS ONE…!

There is a certain undercurrent of helplessness when it comes to a T2D or pre-diabetes (PD) diagnosis. Part of me feels that it’s perpetuated by the pharmaceutical industry, but I don’t want to go down that rabbit hole. Maybe we can do that in the comments or in my Facebook group here (you’re a member, right? It’s free!)…

Right now, if you feel like your T2D or PD diagnosis is out of your hands, not under your control or something you’re helpless to – PLEASE know this: both conditions are 100% reversible with diet alone.

You are not consigned to a lifetime of medication and medical supervision.

You can 100% reverse T2D and PD through simple diet and lifestyle choices.

And the Alkaline Lifestyle is the Easiest, Fastest, Most Scientifically-Proven Way

You might have seen from the case studies I’ve posted over the past few months from my Alkaline Base Camp members and Alkaline Reset Cleanse graduates (note: both programs currently closed) – following my alkaline lifestyle has helped them to reverse T2D and come out of pre-diabetes time after time.

Here’s just a couple of my members reporting their great news: 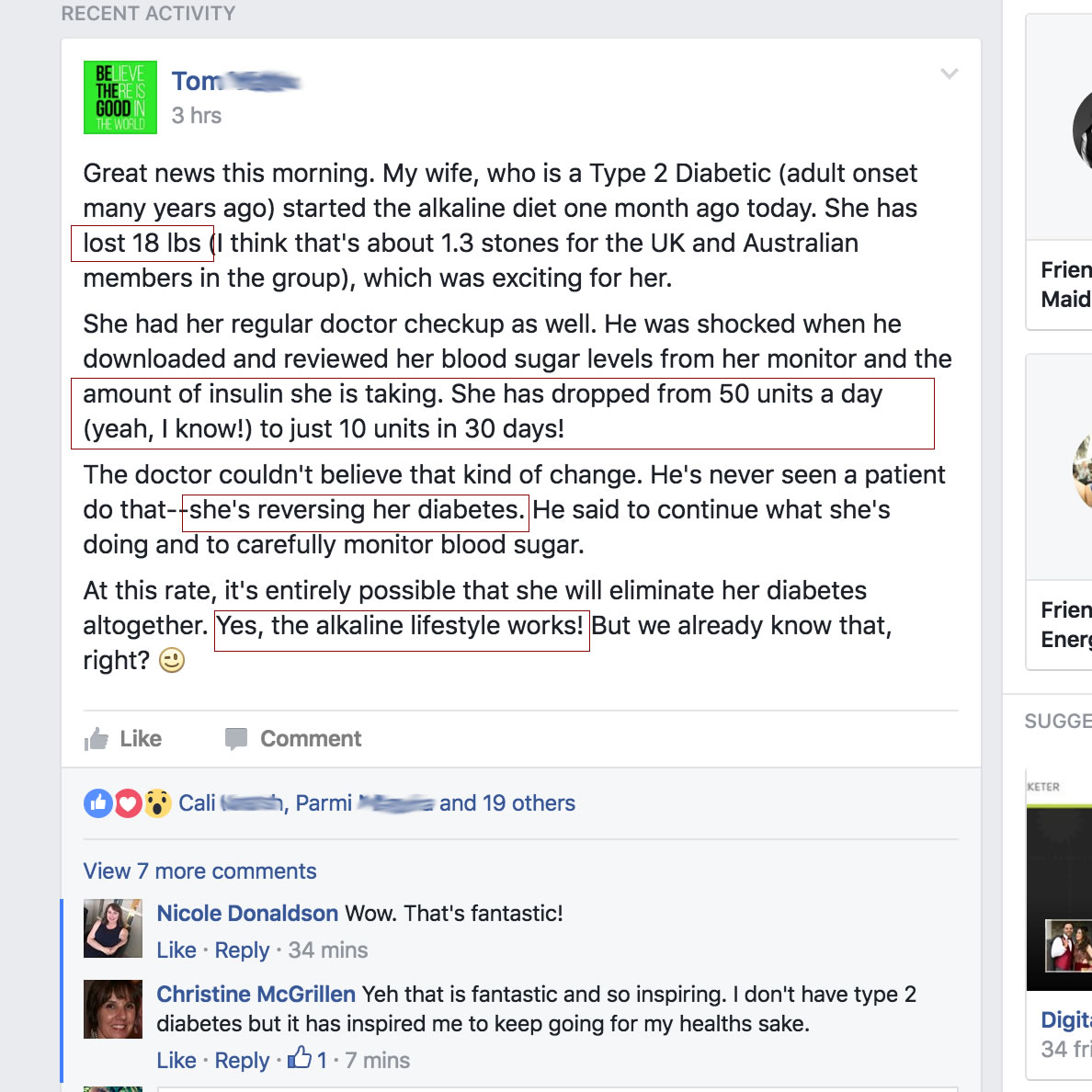 But the evidence isn’t just in practice, the scientific data backs this up too.

I often see and hear “there is no evidence to support the alkaline diet” and each time I laugh. There is not only evidence, there is a TON of irrefutable evidence.

The evidence shows the alkaline diet is proven to help prevent and reverse osteoporosis, cancer prevention, acid reflux, gout, hypertension, inflammation & autoimmune, sports performance & recovery, thyroid & adrenal imbalance, liver and kidney disease and so much more…(and note the alkaline diet is where we are aiming to create the environment in the body so that the body can effortlessly prevent dietary and metabolic low-grade acidosis – it’s not what most critics think of it as ‘trying to make the body more alkaline. If you want to know more about what the true benefit and purpose of eating alkaline is, check this guide).

In fact, alongside the studies showing the alkaline diet’s efficacy for preventing cancer, kidney disease, autoimmune and hypertension – type 2 diabetes and prediabetes are right up there in terms of the volume of studies showing a positive benefit.

These Four Studies are the Tip of the Iceberg…

“Higher diet-dependent acid load is associated with an increased risk of type 2 diabetes.”

15,305 cases of type 2 diabetes were documented during 4,025,131 person-years of follow-up, and across all three measures of the alkalinity or acidity of the diet, they found a strong correlation between an acid-forming diet and risk of type 2 diabetes. If you eat a diet that creates a state of low-grade, diet-induced acidity, you significantly increase your risk of diabetes.

What I like about this study is that they did not rely on just one measure of an acid or alkaline diet, they used three:

“There is now increasing evidence to suggest that diet itself may independently be associated with type 2 diabetes risk. A diet with a high acid load (or high potential renal net acid load, PRAL) can result in a decrease in pH towards the lower end of the normal physiological range, which may, in turn, lead to the development of insulin resistance. Conversely, reducing dietary acid load (the so-called ‘alkaline diet’) may be protective and prevent the onset of type 2 diabetes.”

This study, from the journal Biochemie in 2016, looked across a different sample set from large cohort studies and found the same result – when you eat an acidic diet, you put your body into that state of low-grade acidosis (or as they say, at the lower end of ‘normal’) and this then increases the risk of insulin resistance.

An alkaline-forming diet, well, does the opposite!

This study used PRAL, but also blood lactate and bicarbonate level to measure the relative alkalinity or acidity of the diet.

In this 2016 study, 66,485 women from the E3N-EPIC cohort were followed for incident diabetes over 14 years and 1,372 cases of type 2 diabetes were documented. Using PRAL and NEAP, “the highest PRAL quartile, reflecting a greater acid-forming potential, was associated with a significant increase in type 2 diabetes risk”. The NEAP scores validated this with similar findings.

Again, with huge sample size, the study found a very significant increase of type 2 diabetes risk the more acidic the diet was. And an alkaline diet…again, decreased the risk significantly.

“A high dietary acid load score is associated with an increased risk of T2D in Japanese men.”

This fourth study (and there are many more) is interesting because the follow-up steps of many of the other studies, largely conducted in Western countries, is to replicate the findings with other cultures or geographies, and so this study aimed to do exactly that: in Japan.

The results? The same.

Across 27,809 men with no previous history of T2D, NEAP and PRAL scores were used and across a total of 1191 cases of newly diagnosed T2D were reported. PRAL score was positively associated with T2D.

The Bottom Line Is: An Alkaline Diet Protects Against Type 2 Diabetes

What’s more, in my work with tens of thousands of people over the past fifteen years, I’ve seen, in practice that it reverses it too, and quickly. Of course, no result is typical and there can be no guarantees, but these studies, which looked at over 320,000 people between them, have found the same results – over and over.

If you want to prevent, or support your body to reverse, T2D or get out of pre-diabetes, following my alkaline approach is a very, very smart move.

If you liked this, also read: