In This Guide You Will Get: the lowdown on what’s REALLY in the packaged taco seasoning you buy at the store PLUS my amazing, fast 3-ingredient taco seasoning recipe (plus video)

Food is supposed to be simple, natural and nourishing.

Not toxic, chemical-laden, fake and manipulated to get you addicted (more on that in a bit).

Nothing could be further from the truth.

It’s actually so easy to make healthy food that’s fast, easy and DELICIOUS (delicious enough that the whole family will enjoy it – even the ‘unhealthy ones’).

You just need to know a few simple ‘hacks’ (like I’m about to show you below).

But first I want to highlight what is REALLY in your store bought taco seasoning. I’m making an example of it.

You need to know this because processed, packaged convenience foods are almost always packed with toxic, cell-destroying, carcinogenic chemicals, additives and preservatives.

How They Crammed NINE Toxic Ingredients Into Your Taco Seasoning

How can you go wrong with that? It’s just spices, right?

Pretty much anything and everything packaged for your convenience is a risk, and these little sachets of flavour are a perfect example of how you either have to just cut processed/packaged foods or be incredibly diligent and careful.

I examined two of the most popular Mexican food brands’ taco seasoning (you can probably guess which two brands they are) and found no less than NINE toxic, acidifying, health-destroying additives across these two packets.

This Is What Is Inside Your Taco Seasoning:

Important: this is just ONE example of the hidden toxins in a packaged foods. Most convenient, packaged, processed foods are the same. They largely all contain toxic colorings, flavourings, preservatives, anti-caking agents, fillers, glutens, sugars and more. The best way to avoid 99% of these horrible toxins is to eat fresh as much as possible.

To replace this avalanche of chemicals and artificial crap, you can replicate the exact same flavour in about 30 seconds with just three natural, health-giving, powerful ingredients.

Honestly. And it tastes fantastic in practically any Mexican dish.

Take equal parts cumin powder, cinnamon powder and chilli powder (or cumin seeds, cinnamon stick and dried chilli and smash them up in your pestle and mortar). 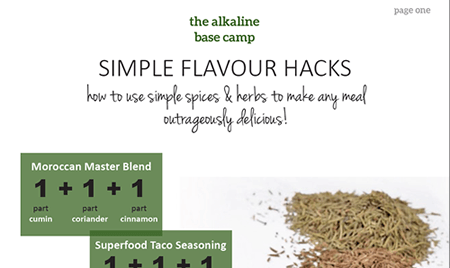 These blends will make any meal taste SENSATIONAL and they’re SO easy to make!

Combining spices and herbs is such a simple way to add HUGE flavour (and nutrients) to your foods.

And you can use this simple spice combination as a taco/nacho/fajita/enchilada seasoning, a meat rub, in wraps, in salad dressings and so much more.

It is just another example of how eating healthy & alkaline *CAN* be delicious, fast and easy – especially when you have someone who can show you how.

Enjoy and let me know your questions or comments below.
Ross