NO Amount of THIS Acidic Food Is Safe (Scientific Proof Inside…) 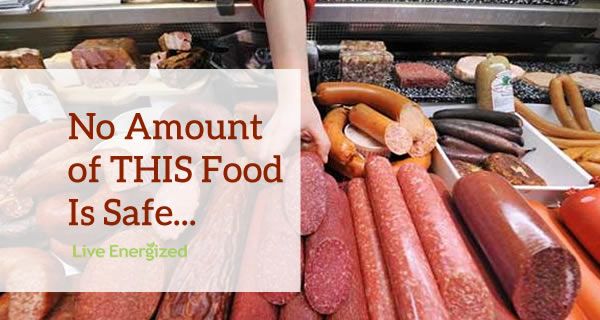 To be alkaline, you don’t have to give up meat forever.

You can still eat good quality, organic meat as part of your balanced alkaline diet.

But do you know what doesn’t fall into that category of high quality, organic meat?

These have to be one of the most damaging, inflammatory, acidic foods you can possibly eat.

Their very clear and precise conclusion?

Nobody should eat processed meat.

“There is strong evidence that … processed meats are causes of bowel cancer, and that there is no amount of processed meat that can be confidently shown not to increase risk …  Try to avoid processed meats such as bacon, ham, salami, corned beef and some sausages.”

Thought that was bad from the World Cancer Research Fund?

Researchers from the Harvard School of Public Health (HSPH) have found that eating processed meat (again, including bacon, sausage or processed deli meats) was associated with a 42% higher risk of heart disease and a 19% higher risk of type 2 diabetes.

““To lower risk of heart attacks and diabetes, people should consider which types of meats they are eating. Processed meats such as bacon, salami, sausages, hot dogs and processed deli meats may be the most important to avoid,”

A BioMed led study of nearly 450,000 people found that eating processed meat increased the risk of dying early by 44%!

“Mortality is increased when we compare those participants who eat more than 40 grams per day of processed meat to those who have 10 to 20 grams per day. For the highest consumption group mortality was 44 percent higher compared with those who eat little meat”

And if that wasn’t enough…

Please start to eliminate processed meats from your diet! Transition away from it, replacing it with smaller servings of higher quality meats, or ideally something even more alkaline!

If I were to redo my Seven Most Acidic Foods guide I would extend it to EIGHT and include processed meats in that list, for sure.

It’s acidic, inflammatory, and proven to directly increase the risk of disease!