7 Benefits of Cutting Wheat from Your Diet

Could cutting wheat from your diet unlock your health & energy?

For decades we have been told that we should be eating 2-3 serves of whole grains every day.


We’ve been told it’s healthy and an integral part of a balanced diet.

But what if it’s not true?

What if the supposed benefits of grains were not only false, but if the consumption of grains was the driving force behind almost all of the chronic conditions people are suffering from?

So why have we been continually told to keep on eating it 3 times a day?

Why is it the largest part of the food pyramid?

Why do whole grain products get the tick of approval from health bodies?

For 14-days I challenge you to put all preconceptions about grains aside and try a grain-free fortnight.

Here are just seven of the benefits you might experience.

Do You Want My Free Anti-Inflammation Training?

I am running free online training (webinar) to show you exactly how to beat inflammation, naturally.

Click here to find out more and register your space – this training will give you the plan you need and the confidence to make it happen!

The Seven Benefits of Cutting Wheat From Your Diet: 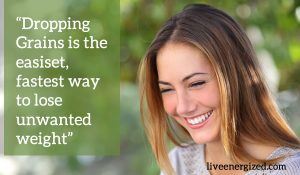 Wheat and grains spike blood sugar like nothing else – more than eating a chocolate bar, drinking a soda, eating a cake or sneaking a cookie [1].

Remember, if you’re on anything like a standard Western diet, 70% of your food consumption either is grain based – and therefore you’re consuming a LOT of amylopectin A.

When there is high blood sugar, insulin is released by the pancreas, and the higher the blood sugar the more insulin must be released.

In this study from the American Journal of Clinical Nutrition, participants were given a diet of 70% amylose or 70% amylopectin. Those on the amylopectin diet had higher glucose and insulin responses after a meal [2] – not good.

If you trigger high blood sugars repeatedly, the accompanying overproduction of insulin will lead to huge and rapid production of visceral fat accumulating around your abdomen (this has it’s own, related fatigue effect which we will get onto in a few minutes).

And the bigger your belly (i.e. the more visceral fat), the poorer your response to insulin, and the result is that higher and higher insulin levels are demanded, creating a vicious cycle.

This is when things start to get really bad. When visceral fat accumulates, the flood of inflammatory signals it produces causes the body to respond much less effectively to insulin. [3]

This so-called insulin resistance means that the pancreas must produce even more insulin to metabolize high blood sugar.

When we get into this cycle, starting with the consumption of wheat (and the amylopectin A) that causes the high blood sugar, we ultimately lose the ability to access our body’s biggest source of energy – fat.

Remember, fat is our biggest source of energy and high insulin levels remove our ability to burn body fat.

When you eat mostly wheat and grains (as we’ve been told to by our government, food pyramid and ‘healthy’ authorities), your body becomes resistant to insulin’s effects and so more and more has to be created with each whole wheat sandwich, bowl of pasta, serve of rice and so on.

The sheer volume of insulin eventually damages the pancreas and leads to even greater volumes of visceral body fat and the cycle continues, leaving you with chronic fatigue and a host of inflammation-based illnesses [4].

This blood sugar DROP is the instant hormonal reaction that gives you the sudden feelings of fatigue and the need for sleep, alongside the irresistible hunger as the body tries to protect you from the dangers of low blood sugar.
…which then leads to a craving for more grains and carbs to spike that blood sugar up again…!

In my research I have found that there are FOUR ways that grain consumption causes fatigue:

1) Hormonal Fatigue: when we consume wheat and that pesky super-carb Amylopectin A, we spike our blood sugar levels significantly, leading to rapid insulin release. With the body trying to now process more insulin than it can handle, we develop insulin resistance…which means that the next time you eat wheat – you release even more insulin and so it continues.

Repeated insulin resistance leads to your body to accumulate visceral fat. This has its own energy-sapping consequences, but more instantly, it damages the pancreas and over time?

The hormone insulin removes our ability to access our body’s primary source of energy – body fat.

Eat gluten-containing grains and you will not only GAIN fat but lose your ability to burn it!

2) Malnourishment Fatigue: as mentioned above, when we continually consume gluten-containing grains, we not only clog our digestive system and destroy those microvilli that are responsible for nutrient absorption and processing, but the anti-nutrients in gluten also ROB you of essential minerals that you NEED to process and create energy!

If you ate NO healthy foods, you’d expect to be low in energy. And gluten basically guarantees that no matter what you eat your body will be getting none of the benefit, either way.

3) Mental Fatigue: when you digest wheat, the wheat is exposed to pepsin (a stomach enzyme) and hydrochloric acid (stomach acid produced to digest it), and the gluten in the wheat is degraded to a mix of polypeptides.

These polypeptides are shown to be able to cross the blood-brain barrier that separates the bloodstream from the brain.

Once having gained entry into the brain, wheat polypeptides bind to the brains morphine receptor, the very same receptor that opiate drugs bind to.

These polypeptides have been labeled ‘exorphins’ – short for exogenous morphine-like compounds and this is what creates the mini-high followed by the mood and energy slump right after.

Repeated exposure to these exomorphins (the dominant of which has been named gluteomorphin) leads to a serious imbalance in the brain and has been proven to lead to a far higher likelihood of depression and schizophrenia.

4) Acidity Fatigue: You’re on my alkaline diet site, so you knew that pH was going to come up at some point, right?

For those of you who are new to my stuff, here’s a quick intro:

The body HAS to maintain a pH of 7.365 in the blood and other extracellular fluids – if it deviates from this even slightly we die. This is why the body will ALWAYS do EVERYTHING it takes to maintain this pH of 7.365 (the same as it regulates your body temperature – a process known as homeostasis).

A misconception of the alkaline diet is that the aim of the diet is to make this pH more alkaline. It’s not. That would kill you. And that would be counterproductive.

The aim of the alkaline diet is to support the body to maintain this pH level – because the damage to the body is done when it has to constantly compromise everything to keep maintaining this pH [5].

The body has a limited acid-buffering capacity while maintaining normal function and the repeated requirement to maintain this pH causes a huge array of knock-on problems – and that an alkaline diet can remedy these problems – from digestive issues, inflammation, candida/yeast overgrowth, bone weakening [6], arthritis [7], gout [8] to more serious issues.

And fatigue is one of the most common, and rapidly experienced consequences of an acidic diet…

And wheat and grains are two of the most clogging, acidic foods by far.

When we have excess acidity the body isn’t able to buffer all of the acids and the acid by-products (such as yeast/candida) and so it stores the toxins away wherever it can, binding them in visceral fat to protect vital organs.

On top of this, the excess visceral fat created by the blood sugar/insulin response leads to extra inflammation and so the body becomes even more compromised in its ability to burn fat, remove wastes and with the clogged digestive system – absorb the nutrients it needs to repair.

When the body becomes THIS out of balance, it takes all of the energy it can muster, just to keep you processing, metabolizing and ultimately, alive.

The inflammation that comes from an acidic diet, fuelled by wheat (which metabolizes to sugar, the most acidic substance to the body you can imagine), causes huge disruption with the immune system, leaving you vulnerable to all manner of conditions.

We all have the energy within us to thrive, but when the diet is predominantly wheat and gluten based, this energy is robbed by the toxic environment it creates, leaving you fat, tired and sick.

You become fat from the rapid visceral fat production (and the out-of-whack insulin production that prevents fat being used to create energy), tired from the lack of nutrients being absorbed from the digestive system and your energy being used entirely just to keep you functioning in this highly toxic state, and sick from the incredible amount of inflammation that suppresses your immune system and prevents it from properly protecting you.

How would you feel if I told you that you might not be getting the nourishment from the foods you work so hard to get into your diet.

Yep, that salad you just ate, or the juice you took the time to make could only actually be delivering a tiny fraction of the benefit to you – and all because of gluten.

There are two very specific and powerful ways that gluten and wheat consumption inhibit the absorption of the nutrients you consume.