Why We Need Pete Evans (and why he’s right)

I have to say I feel for Pete Evans, he is getting a bad rap right now.

And the sad thing is, if people actually stopped and actually read his quotes they would see he is talking total sense.

He has an audience, a big brand and he’s not afraid to challenge the status quo.

He speaks the truth – what he believes in – and the media just LOVE to misquote him and paint him to be irresponsible. While I am also pretty sure he know’s what he’s doing and loves the controversy, the amount his words get twisted is just crazy.

Challenge the status quo, challenge those who blindly believe what they’re told by the mainstream…and look what happens!

You get called crazy. People twist your words to fit their own agenda. The media turns on you…

And your fans, the people you resonate with love you even more, believe in you more and trust in you more.

What Pete Did Now…& Why I Agree With Him

His comments about sunscreen have been taken completely out of context and the media has clung onto their own interpretation of what they *wanted* him to have said…while actually missing the point (or worse, ignoring) what he’s actually said.

Breaking down his written answer on his own Facebook page (yep, his FB page where his fans go – people who want to hear from him – it’s not like he had an outburst on national mainstream TV) he really made a lot of solid, sensible points.

Here’s the quote in full: 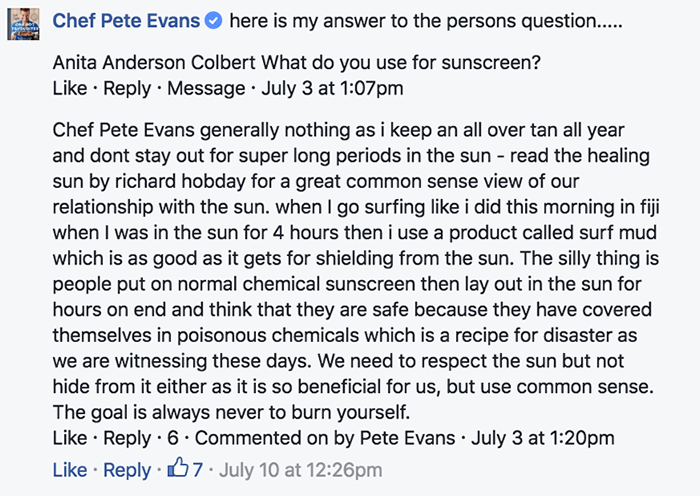 Question: What do you use for sunscreen?

Pete’s Answer: “Generally nothing as i keep an all over tan all year and dont stay out for super long periods in the sun – read the healing sun by richard hobday for a great common sense view of our relationship with the sun. when I go surfing like i did this morning in fiji when I was in the sun for 4 hours then i use a product called surf mud which is as good as it gets for shielding from the sun. The silly thing is people put on normal chemical sunscreen then lay out in the sun for hours on end and think that they are safe because they have covered themselves in poisonous chemicals which is a recipe for disaster as we are witnessing these days. We need to respect the sun but not hide from it either as it is so beneficial for us, but use common sense. The goal is always never to burn yourself.”

Am I missing something or is that incredibly salient, sensible, brilliant advice?

Wear natural sunscreen (buy it from Cancer Council if you’re worried about it being effective because it’s natural), don’t put chemicals on your body if you can avoid it, don’t stay out in the sun for hours to get a tan, get a small (20-30 mins) of sun a day for natural vitamin d, never let yourself burn.

The Chemicals in Sunscreen

Shampoo, deodorant, detergent, oven cleaner, makeup, bathroom cleaner, hairspray and so on are full of carcinogenic, hormone-disrupting, allergy-forming chemicals and there is ALWAYS a natural alternative that does a job that’s just as good.

According to the Environmental Working Group’s Guide to Sunscreens there are EIGHT common chemicals used in sunscreen:

And Oxybenzone in particular is hugely concerning.

Not only have the Centre for Disease Control & Prevention found that it’s present in 96% of Americans (in urine, blood and breast milk where relevant) – but according to the EWG it’s also been proven to be a known hormone disruptor, it mimic oestrogen in the body, causes imbalance with progesterone and androgen, causes thyroid and behavioural alterations, causes endometriosis in women and more…

According to Dr Josh Axe, there are even more than these 8 chemicals too! He lists the following substances to be aware of:

Look for natural, chemical-free, products that will protect you from the harmful rays without the trade-off of coating your skin with chemicals all day-every day.

And finally – keep going Pete. It’s amazing that you’re speaking up for what you believe in.
Ross

PS I also agree with Pete about fluoride. Research has proven that adding fluoride to drinking water makes no difference to the strength or quality of the population’s teeth – and it has also been proven to lower children’s IQ (research out of Harvard) and the American Dental Association’s research has shown that fluoridation of drinking water contributes to enamel fluorosis (decaying of teeth). It’s also a known endocrine disruptor, has been strongly linked to ADHD, hypothyroidism and so much more.

Mercola has some great resources on this here.

One Comment
« How Glyphosate Kills Plants – And Your Immune System