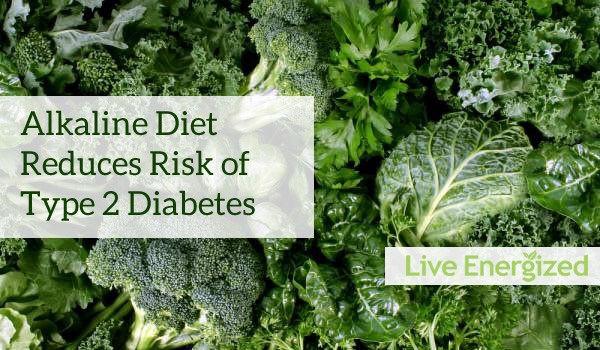 Over 24 million Americans have Type 2 Diabetes (6 million don’t know) and over 86 million have pre-diabetes.

And a Harvard report states that 9 cases out of 10 can be prevented by lifestyle choices.

And this study in the The British Medical Journal has proven that eating alkaline foods, especially dark green leafy foods has been proven to significantly reduce the risk of Type 2 Diabetes.

The research, which is a meta-analysis, showed that

Increasing the amount of green leafy vegetables in an individual’s diet could help to reduce the risk of type 2 diabetes. An increase of 1.15 servings a day was associated with a 14% decrease in incidence.”

This is so important – just small changes can get things moving quickly in the right direction!

You don’t have to do it all at once, you just have to get started.

This is where most people get unstuck. They built it up too much in their head that they have to do it all at once or it’s not worth doing…and then get paralyzed by this expectation and do nothing!

In the UK studies show that 86% of all men and women consume less than the recommended 5-a-day, with 62% consuming less than THREE-a-day…and this includes FRUIT!

Researchers followed a total of 66,485 women from the E3N-EPIC cohort for incident diabetes over 14 years and found 1,372 cases of validated type 2 diabetes.  An acidic diet was associated with a significant increase in type 2 diabetes risk.

Key Takeaway: “We have demonstrated for the first time in a large prospective study that dietary acid load was positively associated with type 2 diabetes risk, independently of other known risk factors for diabetes”

In this meta-analysis of three studies, totaling over 186,000 individuals, the researchers found that higher dietary acid-load leads to a significant increase in type 2 diabetes risk.

Key Takeaway: “This study suggests that higher diet-dependent acid load is associated with an increased risk of type 2 diabetes”

This study included  27,809 men and 36,851 women, aged 45-75 whose dietary intake was studied using a validated 147-item food-frequency questionnaire. Potential renal acid load (PRAL) and net endogenous acid production (NEAP) scores were used to assess the alkalinity and acidity of the diet.  A positive correlation was found between dietary acid load and type 2 diabetes.

Key Takeaway: “A high dietary acid load score is associated with an increased risk of T2D”

In this prospective study, using the data from the Nurses Study found 630 women who at the time of the study did not have Type 2 Diabetes, but did develop it over a 10 year follow up.  The more alkaline the person’s body, the lower the odds of developing diabetes.

Widely recognized in the literature is the mechanism between dietary acid load and cortisol increase.  When the diet is acidic, the adrenals pump out more cortisol than is safe.  This study in the journal Medical Hypothesis shows that one of the common outcomes of chronically elevated cortisol is the increased risk of insulin resistance.  When the diet becomes more alkaline-forming, the risk goes down.

Key Takeaway: “Frank metabolic acidosis is known to promote renal excretion of hydrogen ion by induction of glutaminase and other enzymes…this reflects an increase in pituitary output of ACTH and a consequent increased production of cortisol and aldosterone; Since cortisol promotes development of visceral obesity, and has a direct negative impact on insulin function throughout the body, even a modest sustained up-regulation of cortisol production may have the potential to increase risk for insulin resistance syndrome and type 2 diabetes. This thesis appears to be consistent with previous epidemiological reports correlating high potassium consumption, or a high intake of fruits and vegetables, with reduced risk for diabetes and coronary disease.”

This is just a small snapshot of the research too.  Honorable mentions go to:

How to Get Those Extra Serves of Leafy Greens

The study summarises with:

And this is where I come in!

I recommend that the ideal is seven serves of greens daily for incredible, wonderful health and energy…but this article today is all about just getting started.

Seven Ways to Get That Extra 1.15 Serves of Greens Per Day

Here are a few recipes to get you started, but you will find so many more in my Alkaline Diet Recipe System.

If you order at the moment you get both books for the price of one too.

Remember – baby steps, one day at a time…you don’t have to be perfect from day one, but if you did one of each of these seven ideas per day, you’d be getting extra greens every day of the week!

See also: The Beginner’s Guide to the Alkaline Diet

6 Comments
« How to Remove Uric Acid (Get Rid of Gout)

This website uses cookies to improve your experience while you navigate through the website. Out of these, the cookies that are categorized as necessary are stored on your browser as they are essential for the working of basic functionalities of the website. We also use third-party cookies that help us analyze and understand how you use this website. These cookies will be stored in your browser only with your consent. You also have the option to opt-out of these cookies. But opting out of some of these cookies may affect your browsing experience.
Necessary Always Enabled

Performance cookies are used to understand and analyze the key performance indexes of the website which helps in delivering a better user experience for the visitors.

Analytical cookies are used to understand how visitors interact with the website. These cookies help provide information on metrics the number of visitors, bounce rate, traffic source, etc.

Advertisement cookies are used to provide visitors with relevant ads and marketing campaigns. These cookies track visitors across websites and collect information to provide customized ads.

Other uncategorized cookies are those that are being analyzed and have not been classified into a category as yet.