The TRUTH About Anti-Nutrients – Do We Need to Cut These ’Healthy’ Foods Right Now?

The TRUTH About Anti-Nutrients – Do We Need to Cut These ’Healthy’ Foods Right Now?

Do you want to know my biggest frustration when it comes to health? The thing that makes my blood boil, makes me hopping mad, makes me want to do this face ????…?

It’s what I call ‘health BS’…needless, careless, hype, designed purely for headlines, clicks, shares and for the sake of being ‘controversial’ for attention. I’d go as far as to call it exploitation of information.

We are seeing it more and more these days.

First it was the oxalate and “Kale is BAD for You!”…that was completely unfounded, without research or evidence, but boy it got a lot of clicks for a few websites… (see more about the truth on oxalate here)

Then it was nightshades and “Don’t Eat Tomatoes!”…that too, is based on totally false science, fuzzy logic, and is without research or evidence…but wow, a couple of folks sold some extra books….

And all of a sudden spinach, lettuce, tomato, quinoa, lentils, almonds, broccoli and more are off the table…

Wow. I better stop eating those quicker than you can say ‘fake news’, right?

Not quite. And we need to dig into this one a little more to get the real truth. And the simple truth too.

Now – whereas the nightshade and the oxalate/goitrogen fuzzy-logic-stories were completely without evidence and were making a ton of giant leaps with their hypotheses…anti-nutrients ARE in these foods, they DO exist and we actually know a LOT about them.

But once again, why would people let the truth get in the way of a good controversial headline or book?

This all pains me so much because I know, from my 15 years experience of coaching people to their health goals and dreams, that confusion, complexity, overwhelm and frustration are the Four Horsemen of the Apocalypse when it comes to taking action with your health and everything I do is to help you to take action…

And provocative, fuzzy logic health claims like these are doing nothing but causing people to stop and give up. They’re causing paralysis by confusion.

In my ‘Living Alkaline with Ross’ Facebook group last week (it’s free by the way – you can join here) I saw a tongue-in-cheek post from one of my members who said,

“I’ve read ten health books since the start of the year, and I’m ready to start – but if I follow all of the advice I’ve read, the only thing left to eat is air!”

And I get it. And the hype around anti-nutrients has now left us believing that even some of the most ‘safe’ healthy foods – staples like broccoli, lettuce, spinach, pumpkin, almonds, sunflower seeds, quinoa – are now suddenly off limits? I can see how anyone would want to just throw in the towel and give up.

So today, I want to lift the lid on all of this, give you the real truth, the science, the research and most importantly – you’re simple steps forward, so you can completely understand what anti-nutrients are, what you need to be aware of, careful of and what you can ignore. You’ll know the foods you can eat, those you can avoid and everything in between.

If you currently have a health challenge and you’ve been told to avoid anti-nutrients…or if you’ve just heard the scare-story and want to know more….or even if this is the first time you’ve even heard of ‘anti-nutrients’, I want you to read on, because I’m about to make things very clear and simple for you.

This is the best place to start, so we really understand what lay behind this ever-so-negative name…

Anti-nutrients, are natural compounds (note, not a result of genetic engineering, they’re natural) in plants.

In the scientific community, the term anti-nutrient was attributed to certain plants because some of the compounds in the plant can be linked to a lower absorption rate of some of the other nutrients in that plant.

Based on that information alone, you can see how some people have taken that one fact and run wild with it.

But we need to dig into this a bit more, because that’s only one tenth of the full picture.

They are found in all plant foods. The types of anti-nutrient and the volume is different and hugely varied from food to food.

They are a small part of the bigger, complex matrix that makes up the growing plant tissue.

But this is only one part of the picture.

What You Need to Know About Anti-Nutrients RIGHT NOW

There is a bigger picture here, and please remember this because it is so important:

For the consumption of anti-nutrients to become and issue from a nutrient-blocking perspective you would have to both:

The name ‘anti-nutrients’ is hugely misleading. It only refers to this one (let’s face it, insignificant) action. I wish it had another name.

These compounds, which are also referred to as the much more accurate ‘phytonutrients’ also have incredible health benefits!

We celebrate phytonutrients, but we chastise anti-nutrients. It’s all in the name – they’re the same compounds!

These same compounds which are being demonised to the degree that people are fearing the wonderfully healthy quinoa, spinach and broccoli are full of disease-fighting, protective, alkaline, anti-inflammatory, antioxidant-rich goodness!

This is the real truth – with many foods there is good and bad. There is risk and reward. There is balance. This is absolutely the case with phytonutrients. Yes, some may decrease the absorption of some nutrients. This risk is minimal, but it is there, we know it exists. However, these foods all have huge benefits too.

These foods contain anti-nutrients but their benefit so, so, so, so far outweighs the minuscule risk of the anti nutrient activity.

Let’s Look at a Few Anti-Nutrients in More Detail

Let’s take glucosinolates as our first example, which are found in broccoli in particular. Glucosinolates can lower the thyroid’s ability to absorb iodine.

But unless you eat an astronomical amount of broccoli AND you’re chronically deficient in iodine (which is practically impossible in the developed world), it’s likely the consumption of broccoli is not going to any damage…in fact, the consumption of broccoli is going to help HEAL your thyroid as not only does it have a hugely anti-inflammatory, alkaline-forming effect but the iron, omega 3, vitamin c, selenium, zinc and more in broccoli are specifically super-protective and healing for the thyroid.

Phytates are one of the most demonised – the most accused – as they reduce the absorption of calcium, iron, zinc and magnesium. However, as I’ve mentioned – the reduction of absorption is not only tiny, but is restricted to the food they are contained within (not your overall daily diet)…plus phytates have been proven to improves glucose response, reduce kidney stones, give anti-cancer protection, reduce osteoporosis risk, protect and repair DNA and is a powerful antioxidant.

Even tannins, which can bind to iron, sure – have been proven to be anti-cancer, support the cardiovascular system, they have anti-microbial properties and so much more.

And polyphenols, which most people would be surprised to hear are an ‘anti-nutrient’ because all we hear are great things…but yep they’re also on the list! And as we know, polyphenols have huge and diverse benefits for human health including fighting cancer cells, protecting the skin against ultraviolet radiation, fighting free radicals, promoting cognitive health, reducing inflammation, supporting blood sugar health and so much more.

I hope you can already start to see how this myth that’s grown around anti-nutrients has been blown way way out of proportion and has been mis-interpreted, mis-communicated and dare I say it again, exploited for attention, website clicks and book sales.

The Real, Simple Truth About Anti-Nutrients

What You Need to Know Now, Be Aware Of, Be Careful of & Take Forward

The core facts about anti-nutrients, and the reason I want you to largely ignore the hype are:

When people talk about avoiding anti nutrients, they often focus on a couple in particular – lectins and phytates – and those two are both found in gluten-containing grains such as wheat, barley, rye, spelt and so on. I agree with this advice, in that these grains are some of the most pro-inflammatory, acid-forming, oxidative-stress-causing, unhealthy, endocrine disrupting, digestive imbalancing, diabetes-causing foods on earth. They run a close second only to sugar.

And there are myriad issues with grains like this – and the phytate and lectin argument often gets thrown in there with them. Which is, again, misleading with regards to anti-nutrients.

For example, there is a suggestion that the lectins can cause an immune-response that could theoretically cause leaky gut.

It’s what I’d call a ‘dotted line theory’, for sure.

HOWEVER, by FAR more contributory to leaky gut is the fact that when digested gluten is broken down into many things, one of which is a protein gliadin which causes the release of another protein called zonulin (which we only discovered in 2000).

Zonulin modulates the permeability of tight junctions between cells of the wall of the digestive tract. It should only be released in a case of the immune system requiring action, but gliadin causes it to get released regardless – meaning that there are unrequired gaps and holes in the wall of the digestive tract 24/7 – allowing undigested matter, toxins, waste and more to pass back into the blood – leading to leaky gut. 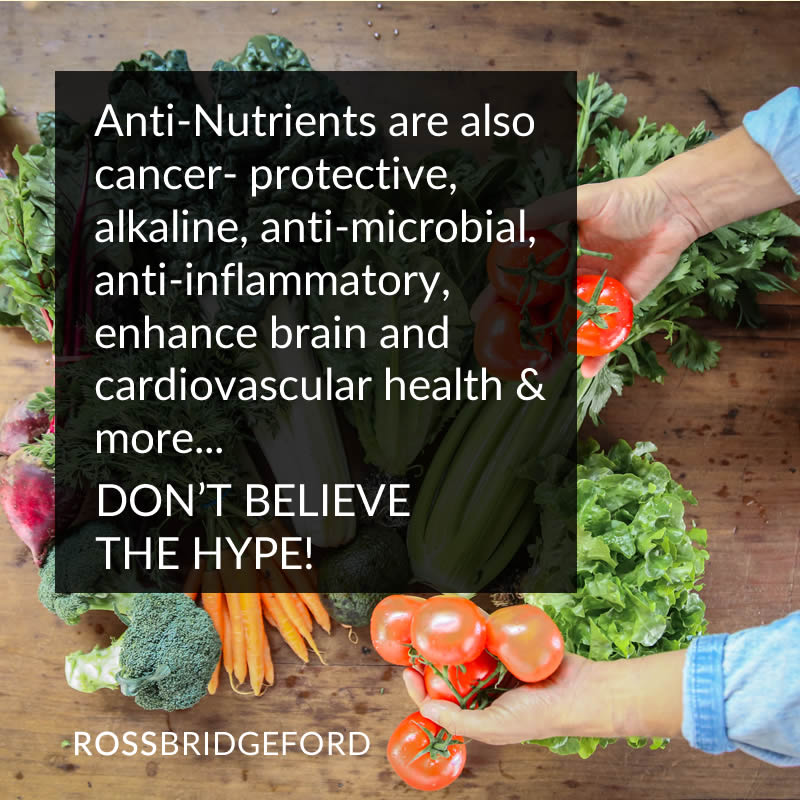 You know me – I am all about REMOVING unnecessary complication, removing complexity and confusion – and keeping it as simple as possible.

Each of these foods can contain a small risk-factor, and it could even be that prevalence of anti-nutrients.

In the case of nightshades it could be the alkaloids that we are being told cause autoimmune issues (when in reality, barely any nightshades contain anything other than trace levels of these, which have zero effect on the body and those that do i.e. potatoes that have sprouted and gone purple, are not something we’re going to eat even close to enough of to have any negative effect).

It could even be that spinach contains cyanide in super, tiny, micron-sized amounts!

In each of these cases the downside to these foods is miniscule. It shouldn’t even be a point of discussion.

Yet the upside is HUGE – these foods are absolutely essential in the prevention of chronic disease.

Turmeric, which has been shown to be more powerful than dozens of prescription medications, incredible cancer-preventive, proven to help reverse type 2 diabetes, heart disease and more COULD be put in the naughty corner because it is 2% oxalate. But if you want to have abundant health and prevent degenerative disease you would be absolutely crazy to avoid it.

People with thyroid issues are told to avoid oxalate, but turmeric is probably the most anti-inflammatory natural compound on earth and thyroid disorders (both hyper- and hypo-) are disorders of inflammation (see my hypothyroidism plan here).

The bottom line is this: nature has provided us with an incredible, abundant array of delicious, nourishing foods. PLEASE don’t get caught up in anything other than the guiding principle of eating real, whole foods, as close to nature as possible.

If you stick with my principles of eating 60-70% or more alkaline-forming foods you will thrive. These alkaline forming foods are all naturally nutrient-dense, anti-inflammatory, antioxidant-rich and have a restorative, regenerating, healing effect on the body.

Cruciferous vegetables, oxalate-containing foods, nightshades and indeed these anti-nutrient-containing fruits, vegetables and nuts should never be defined by those titles. They are healthy, natural, healing foods and I am giving you permission to:

…completely ignore the hype around anti-nutrients.

Don’t get caught up in hype, fads or frustrated by the complexity. Trust your instincts, trust your heart and your intuition.

Trust nature to provide the tools and trust your body to know how to use them.

Health should be simple, let’s keep it this way. 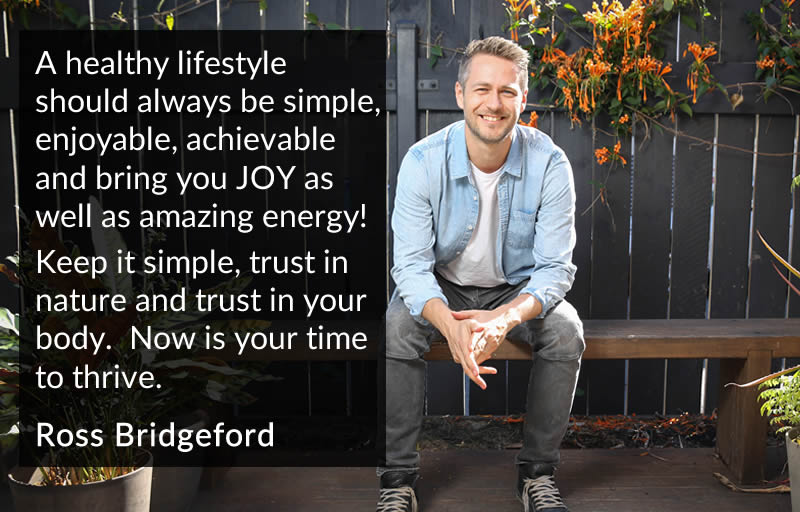