Sometimes nature does the most obvious things to help us out.

You know how there are certain things in life that just seem so obvious you think that can’t be true! Certain consequences, like removing red wine stains by tipping white wine onto them (I still can’t believe that works!), are in fact, everywhere.

And chlorophyll gives us another one of them. 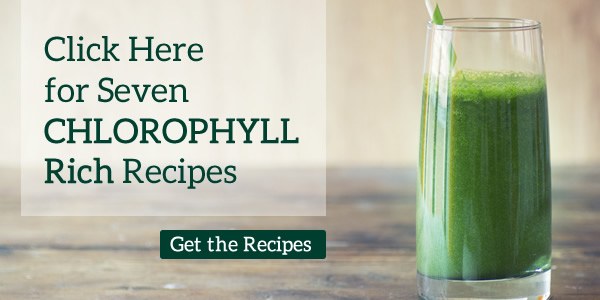 And what is the most essential substance that our body uses to build and transport red blood cells? Hemoglobin.

So it makes sense that we should, somehow, give our body hemoglobin! “But how?” I hear you ask.

The Benefits of Liquid Chlorophyll – why I love it!

Chlorophyll is one of my favourite nutrients. It has SO MANY health benefits it makes it a true wonder-food. However, the most marvellous and amazing benefit it gives comes from the fact that its molecular structure is almost identical to hemoglobin except for the center atom. In hemoglobin this is iron, whereas in chlorophyll it is magnesium.

This means that when ingested, liquid chlorophyll can actually help to do the job of hemoglobin (hemoglobin is so vital to the health of our blood – in fact, blood is approx 75% hemoglobin). It helps to rebuild and replenish our red blood cells, boosting our energy and increasing our wellbeing almost instantly.

I know this sounds a bit like the old ancient Japanese legend that eating brains makes you smarter – BUT – eating/drinking liquid chlorophyll can increase the quality AND quantity of your red blood cells.

In this 2004 study on wheatgrass the researchers found that in cases of Thalassemia Major (a genetic gene mutation that effects the production of haemoglobin – causing severe anaemia) using wheatgrass juice (of which 70% or more of the solid content is liquid chlorophyll) led to a reduction of in the requirement of red blood cell transfusion of over 25% in more than 50% of the study participants.
In other words – chlorophyll was so effective at helping build new red blood cells the patients required far less blood transfusions.

Chlorophyll has the power to regenerate our bodies at the molecular and cellular level. Why do I feel so sure that it’s helpful to our body? Because it’s indisputable that GREEN FOODS are incredible for our health and all green foods contain an abundance of chlorophyll!

So in addition to helping to rebuild and replenish our red blood cells, liquid chlorophyll benefits include not only being highly alkaline, but also the following:

So let’s get into…

How to Get Liquid Chlorophyll into Your Life Every Day

Getting chlorophyll into your daily diet is really quite easy – if you add an abundance of the foods from my ‘most alkaline foods‘ guide you’ll be getting there easily, every day.

I know I am always going on about the importance of greens in your diet, but this is one of the main reasons why – it ensures you’re getting plenty of chlorophyll.

Here are a few sources you can use each day to ensure you’re getting your quota:

I wrote a guide on getting more green foods into your diet here.Also here is my guide to getting 7.25 Serves of Greens in 6.34 Minutes — so there are no excuses!

And this is a delicious Kale & Broccoli Soup recipe from Young & Raw.

So the simple message is this: go green.

Eat, drink, ingest green foods however you can and whenever you can – you will feel the difference in your energy within 48 hours!

My personal experience suggests that going green, going alkaline and getting a mass of chlorophyll daily does absolute WONDERS for your health and energy.

You really notice the difference!

So if you want more energy, go get yourself some. It’s really that easy!

NOTE: Overcooking is particularly important to avoid when it comes to chlorophyll, but with very short steaming times, the chlorophyll content of these foods is preserved, and absorption from these foods may actually be increased. [Source: whfoods.com]